From online learning to a new normal: schools in China begin to reopen

2020 has been an extraordinary year for schools around the globe, as lessons and learning have been disrupted by the coronavirus pandemic. Now, however, for one school at least, there are signs of a new normality slowly returning…

Like many heads of schools in China and around the world, John’s sleepless nights are the consequence of the COVID-19 pandemic that has closed schools and disrupted learning for millions of pupils. 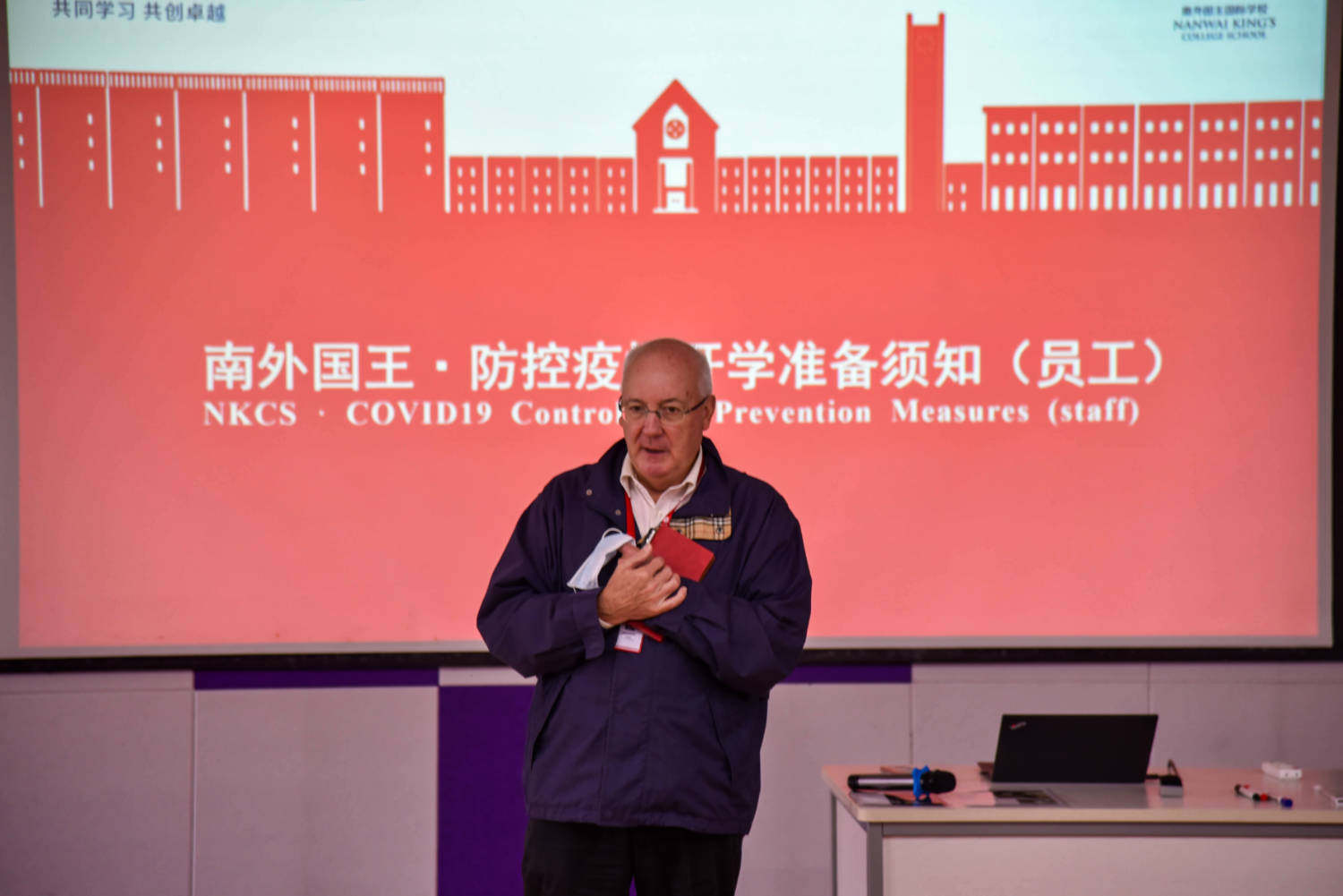 For John, the trials and tribulations that would come to define the 2020 school year began when Nanwai King’s closed for the Chinese New Year holidays on 17 January. As many teachers, students and their families, including John, traveled across or out of China for the holidays, there were already signs that semester two would not resume as expected in February.

The outbreak of coronavirus in epicenter Wuhan was gaining pace, rumors of lockdowns were starting to swirl, and authorities were already moving to ensure schools remained closed after the holidays. But, as John reflects, no one at that stage really knew how long closures would last…

The Chinese New Year vacation was spent hurriedly preparing for lessons to go online, with teachers and staff scattered across the world. Rapidly changing information about the situation was communicated to parents, while members of the school community wrestled with whether to return to Wuxi or stay put in holiday destinations. Wuhan and Hubei officially declared a lockdown on 23 January, setting the precedent for similar measures in other Chinese cities. 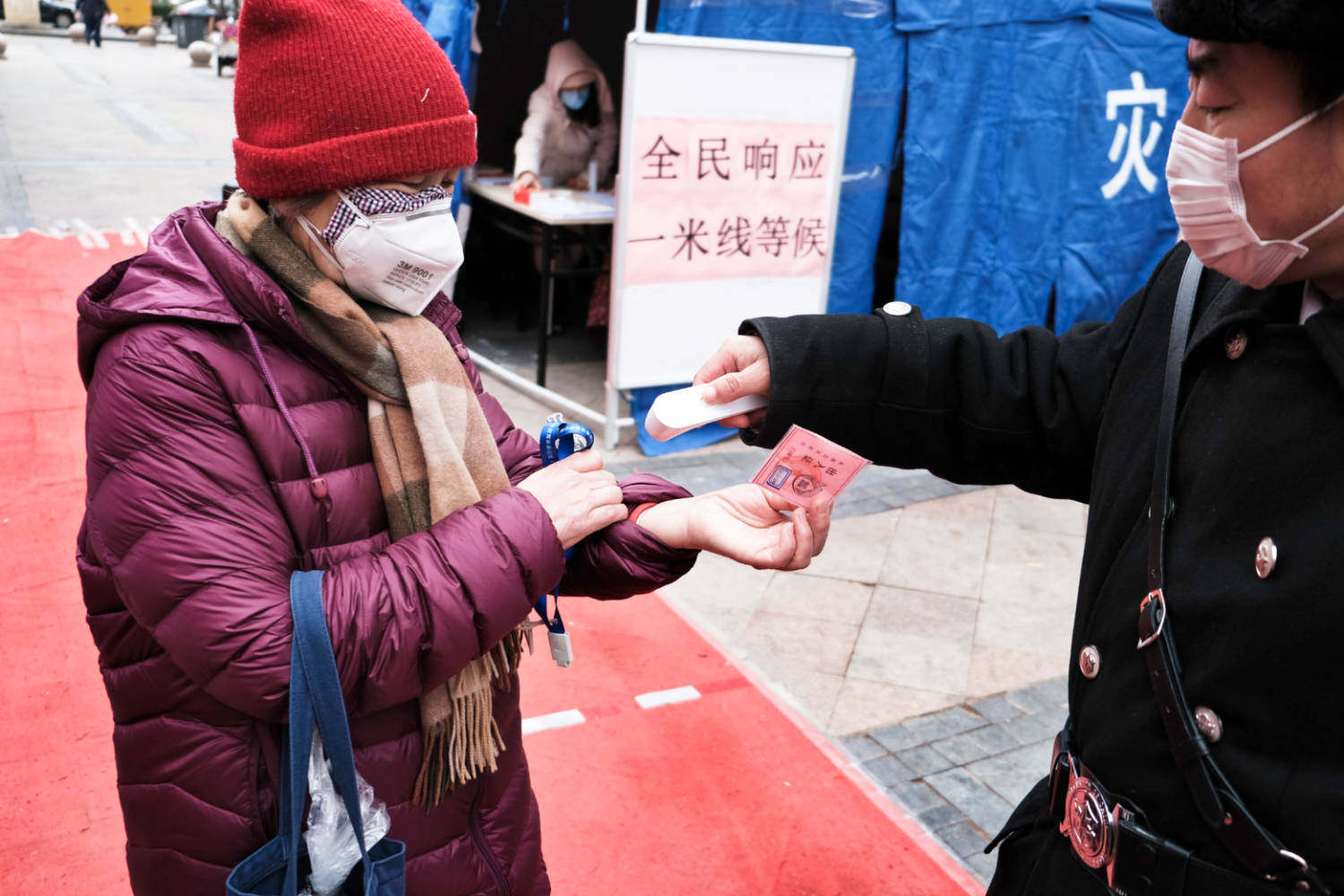 The new school semester began remotely on 10 February. By that time, John, his senior leadership team and many of the school’s teachers had managed to return to Wuxi and gone into strict lockdowns at their homes.

Those teachers who were back in the country were able to deliver live online lessons, mostly through video conferencing platforms Microsoft Teams and Zoom. In the early days of online learning, there were technical issues as the systems became overloaded with the sheer volume of traffic. Teachers had to adapt and experiment with the best way to deliver their classes and content. Videos, for example, were quickly abandoned as it became clear that sending and receiving them was too difficult.

Older pupils, for the most part, were able to cope with online lessons virtually all day. Things were more challenging with younger pupils, who were least able to sit on a computer all day. John admits the school did have to rely on parents and grandparents to help deliver learning activities to these age groups.

“While I think a lot of parents gained a greater appreciation of a teacher’s work, many did struggle with the technology and the sheer pressure of the situation,” says John. “We were in constant contact with families to offer support and advice on how to work with younger pupils. It was tough, especially for those parents who also had to work from home themselves.”

While many teachers managed to return to China, a percentage had got stuck outside due to the restrictions many countries placed on flights to and from China. The varying time zones that teachers found themselves in, along with a lack of equipment (many had gone on vacation and left laptops at home in China), caused the biggest issues.

Challenges were combated by teachers setting lessons via email, sending pupils work to be completed in their own time. Teachers actually found that some students excelled during these ‘email lessons’ as they were able to complete work at their own pace and did not have to cope with any shyness of interacting with peers in the classroom.

Others, however, understandably struggled with the virtual learning environment, missing the routines of school and face-to-face social interaction.

“Everyone missed their friends so much, they missed the teachers and the social side of school,” says John. “You just can’t replicate that online, so that was tough for a lot of pupils.”

Some things remain the same

Throughout the period of online lessons, while so much of pupils’ everyday life was different, John and his staff tried to keep some aspects of the school day reassuringly the same. Pastoral care, for example, remained an important part of teachers’ roles, as they supported pupils through the emotional and social challenges of life under lockdown.

At other times, regular house competitions and activities, such as online musical performances, were run to lift spirits and maintain a sense of community.

John believes that one of the most grounding activities during this time was the weekly flag-raising ceremonies. Usually held in the school’s auditorium on a Monday morning for the whole school, in confinement, the flag-raising was delivered via a pre-recorded video. Different teachers gave an online address at each ceremony, many of whom shared their experiences of the lockdown.

“We needed to show the children how everyone was dealing with the situation,” says John. “We had one teacher who gave an address from his home in Croatia, while another showed that he was at home and still doing his weight training. Another teacher was doing yoga exercises every day with their children. The children too were able to share their lives under lockdown – it was really meaningful to everyone.”

The flag-raising ceremony took place every week throughout the more than 12 weeks that online learning would last. As the situation intensified around the world and perhaps sensing what was to come, John was able during this period to persuade all of his teachers still outside of China to return to the country, despite difficult journeys and much anxiety about the situation in China.

“Getting staff to come back was challenging,” admits John. “At that point, there was a lot of fear about what was happening in China – coronavirus hadn’t yet started to affect Europe or the States. Teachers had family in their home countries asking them not to come back and I understood why people were reticent at that time.” 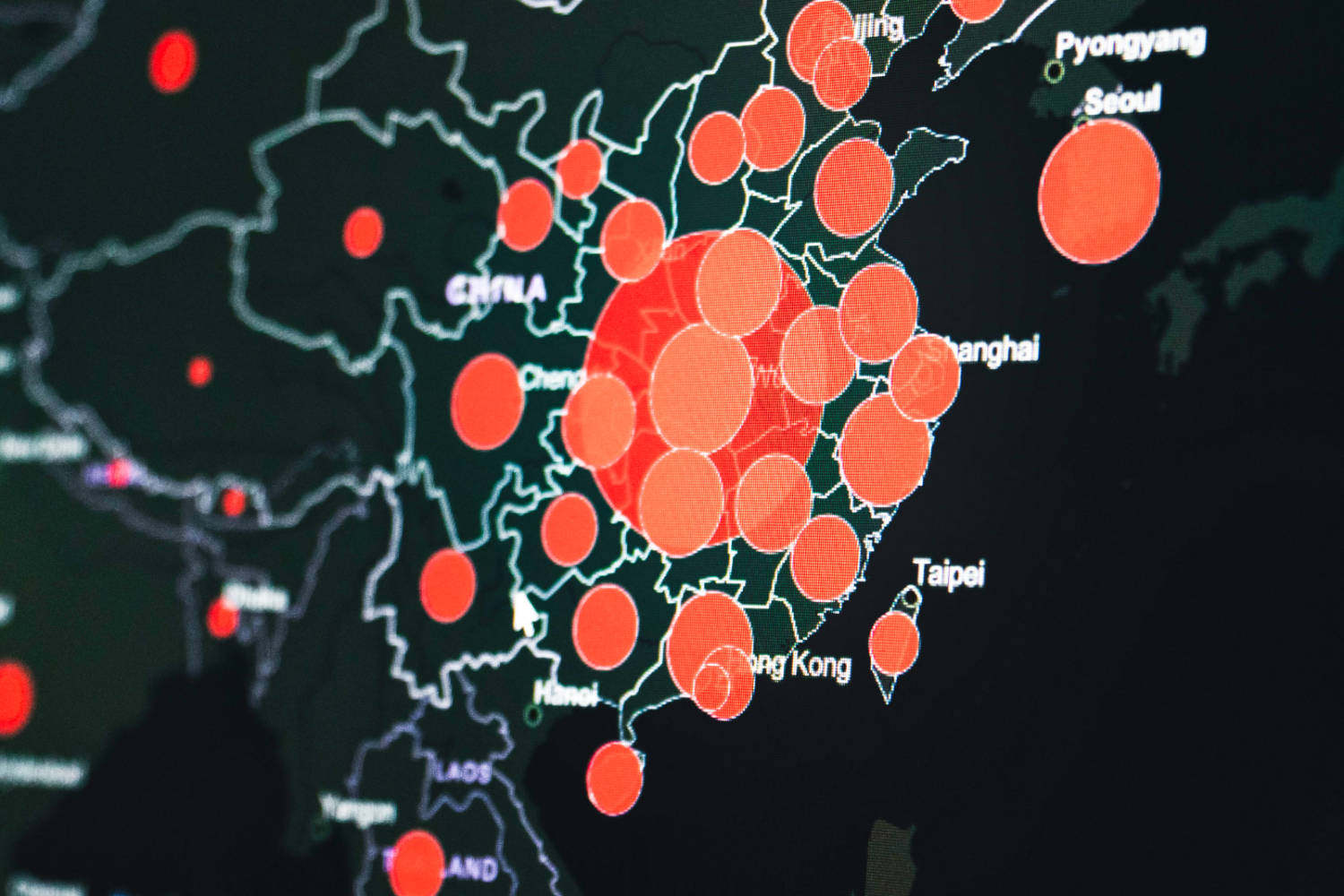 It required John to give teachers much reassurance about the actual situation in Wuxi, which in the end saw only a few hundred cases and no deaths. This, combined with, what John felt was, reliable and transparent information from local authorities, helped him to encourage everyone to return from far-flung corners of the world.

It was extremely fortunate that teaching staff at Nanwai King’s made this colossal effort. As China began to emerge successfully from the health crisis, on 29 March authorities suddenly declared the country’s borders shut to all foreigners, including those already in possession of a valid resident permit. Thousands of teachers found themselves stuck away from places of work. John believes that Nanwai King’s might well be the only school in China to have its full body of international teachers back in the country.

Getting back to ‘normal’

After passing a series of rigorous inspections by police, and health and education authorities, as well as submitting the travel and health information of every single one of the school’s 1,350 pupils and 180 teachers, and their families, the school was granted permission to commence reopening in March. 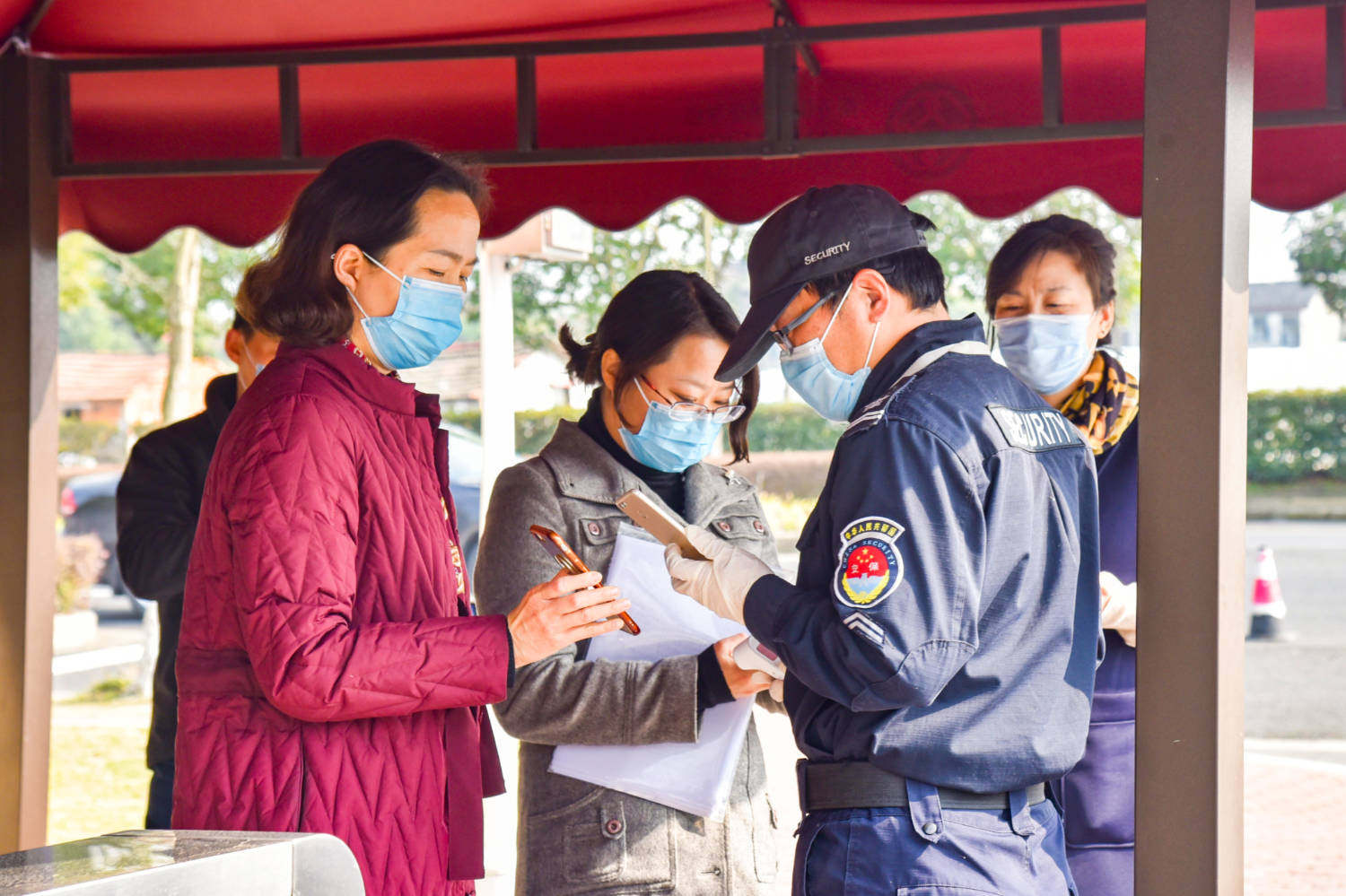 Nanwai King’s is around now two weeks into its new normality. A two-month staged return has seen pupils of different age groups slowly return to the school. Grade 9 was the first to arrive back on 30 March, with kindergarten pupils the last to come back, at the end of May.

“The children were so excited to be back,” says John, laughing at the happy memories. “It was very emotional to have everyone back together at last.”

The very planned, methodical return of pupils has given teachers and staff time to test the different safety measures that have been put into place. These include regular temperature checks for pupils and staff, strict dining regulations that require set meals to be pre-served to two diners per table (all of whom must face the same direction to eat). Classroom and PE lessons have to be socially distanced, while every classroom must be disinfected after every lesson.

The flag-raising ceremony that became an integral part of the school day during confinement has had to continue online, as congregating in groups of more than 50 is prohibited. Many co-curricular activities that would usually see pupils of different ages come together have had to be postponed or taken up online as mixing age groups is also not allowed. Admissions events for new parents have gone online or split down into smaller events every weekend.

It’s a lot to take on and the school remains in a period of learning and adjustment. Children understandably have been affected by their experiences and as each year group returned to school, they were given the opportunity to talk about things with teachers.

“The pupils have actually adapted to everything very, very quickly,” says John. “They’ve learned a great deal over the last few months about managing unexpected situations and building resilience.”

Parents of course have been apprehensive about their children going back to school, although John feels that, for the most part, they are supportive of schools reopening and face-to-face learning starting again.

He says it’s been fundamental for the school to engage with parents over the last few months, in order to reassure them and address any concerns. The school caters for 1,300 families and has parent support groups with representatives at different grade levels, who have been the liaison point between parents and the school.

Older pupils have generally been able to keep up to date with work, while teachers have submitted predicted grades for those who will not be able to sit external examinations. Perhaps, surprisingly, it’s the parents of younger children who are most concerned that they’ve missed out.

“It is difficult to reassure parents,” says John. “But it’s important for us to reiterate that children around the world are in the same situation. It’s hard but children will catch up.”

While schools in China settle into a slightly surreal new era, the ongoing effects of the coronavirus pandemic continue to be felt. China’s borders are still closed and while there are positive signs that restrictions will be eased soon, allowing new teachers to enter the country, everyone is still waiting for further direction from the government and education authorities.

So, while it seems that the worst of the coronavirus pandemic is over now for China, John’s restless nights may well continue as the entire world continues to recover from this most unprecedented of situations.